India as the SaaS Operating System of the World: Building Global B2B SaaS in Troubled Times 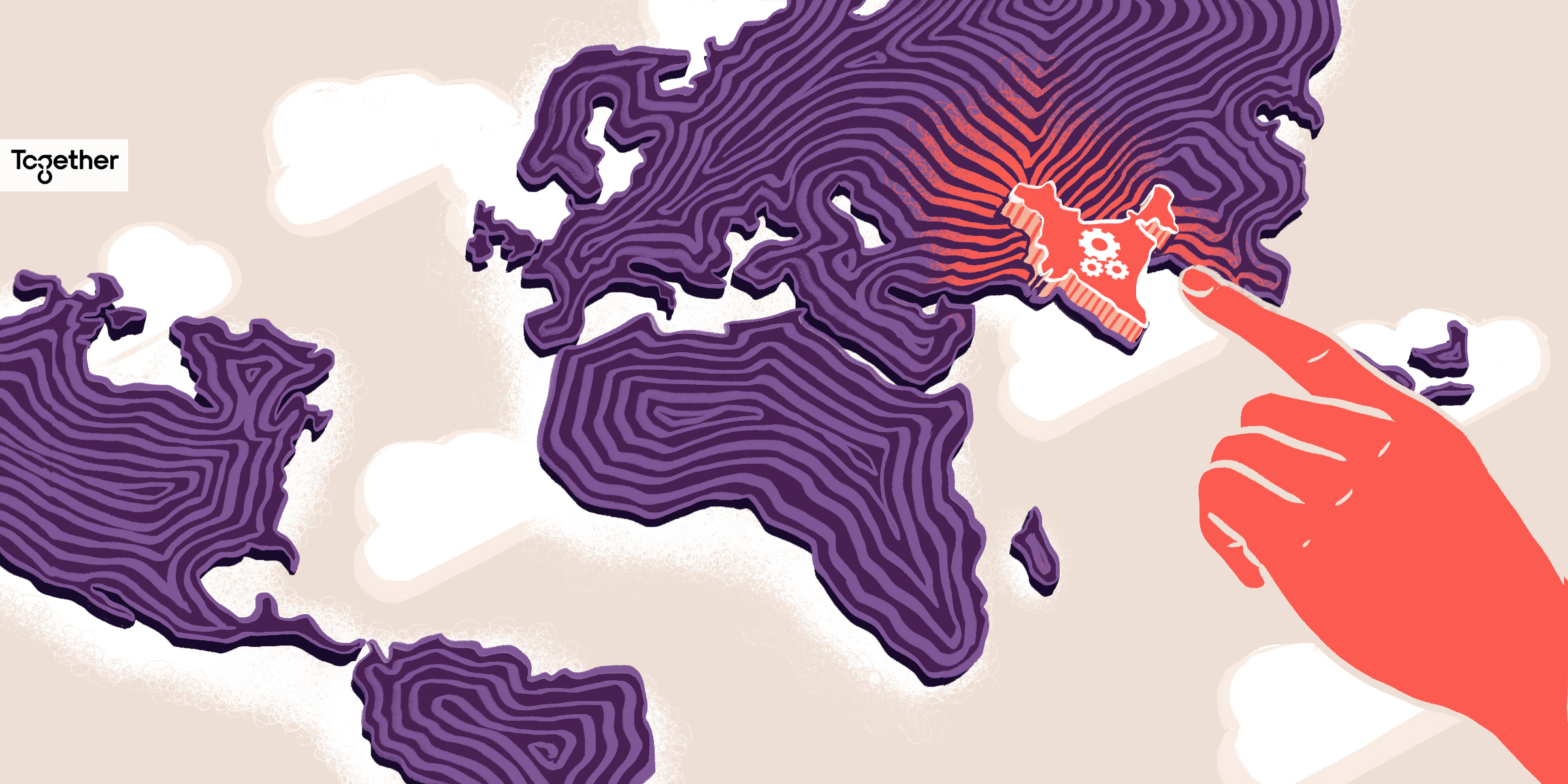 Last year, we had written on how India has an unprecedented trillion-dollar opportunity to emerge as the “SaaS Operating System of the World”.

In this post, we will dive deeper into this manifesto to contextualize our opportunity against the global market and macro conditions that we are currently operating in.

As we enter the new year, there is no doubt that 2022 has been a roller coaster ride in more ways than one. The excesses of 2021 in terms of startup funding and valuations has given way to a year where the dial has been turned back to the other extreme – drying up of capital, precipitous drops in valuations and layoffs galore. The broader environment is not particularly favorable as well – rising interest rates leading to capital pull-backs, unforgiving public markets, high inflation, fractious wars and the Damocles sword of Covid still hanging around. It would come as no surprise if this upcoming year is going to be even more difficult than 2022.

While these dark clouds are portentous, there is a bright silver lining that offers hope and affords opportunities – specifically for Indian SaaS.

The opportunity to build global B2B SaaS businesses that will endure for ages and in the process establish India as the “SaaS Operating System of the World”.

But how does one reconcile the seeming anachronism of such a grand ambition with the grim ground realities of the day?

The answer lies in three parts.

There is little doubt that 2022 was a year of macroeconomic shocks – just as the world was looking forward to coming to grips with a post-pandemic world, rising interest rates in global markets precipitated by high inflation and recession fears lead to a sharp fall in valuations and funding. Rising fears tangoed with falling sentiments to create a self-reinforcing vicious cycle.

But even amidst all this gloom, SaaS has stood out as a beacon of hope. There is no doubt that there has been tempering of valuations – multiples fell from 46 times their last 12 months (LTM) revenue to 11 times. But the fact remains that even this multiple is a rare outlier in a world where businesses are valued at 2-4 times their topline. SaaS companies can command a much higher valuation multiple for well-founded reasons.

For one thing, the demand for SaaS has never been stronger. The pandemic accelerated the rate of digital adoption throughout the globe for businesses of all sizes and even as the fallout of the pandemic recedes, many changes that it has wrought are likely to be long-standing – from the need for agility and efficiency in business strategies to market opportunities that span the entire globe rather than just local communities. Large enterprises value the low-capex nature of adopting SaaS while small businesses relish quick on-ramps and ease of use.

Mirroring the imperatives of the customers that they serve, SaaS firms can scale their toplines efficiently and quickly without requiring outlandish investments. This explains why SaaS startups have been largely unaffected by the funding winter. According to one estimate, VC funding for SaaS startups in India stood at $4.2 billion in 2021 and it is estimated to go beyond $6.5 billion this year

There are a few key reasons why SaaS companies are seeing increased VC interest even amid a market downturn. SaaS is a rare line of business with gross margins routinely exceeding 75%. The recurring revenue model and upfront billing aspect of SaaS businesses facilitate quicker cash-flow profitability with stable and predictable future income streams. In many instances, an economic downturn is a source of strength for SaaS startups as customers increasingly look for solutions that will help them do more with less.

But even with this bullish prognosis, there is ample reason for being cautiously optimistic. Because the future is not likely to be like the past.

The Times They Are A-Changin’

2021 was a year where all genres of ambitious startups were rewarded with an unprecedented funding glut that gave wings to “growth at all costs” dreams.

2022 was a year where the “value of growth” plummeted.

For many years before 2021, growth rate has been the largest factor in determining a company’s valuation. The Rule of 40 (growth rate + free cash flow margin) was a metric that investors evaluated companies on before making their bets. In 2021, cash was so cheap that investors didn’t care much about historical and current growth but put a premium on future growth – growth that could be achieved by pumping in large amounts of capital into sales and marketing expansion. Predictably, this led to a situation where company valuations were uncorrelated with their current metrics and startups were routinely funded at valuations ranging from 50-100X of their topline.

But now, the market sentiment has shifted from “growth at all costs” to “measured growth” – so much so that companies exhibiting high growth rates are trading at a discount to those that are balancing growth with profitability. The “rule of 40” is still relevant but while companies were earlier aiming to hit that number by growing at 100% annually with negative 60% cash flow margins, today these plans are tempered with companies aiming to grow at 40-50% with cash flows that are at negative 10% or ideally positive. 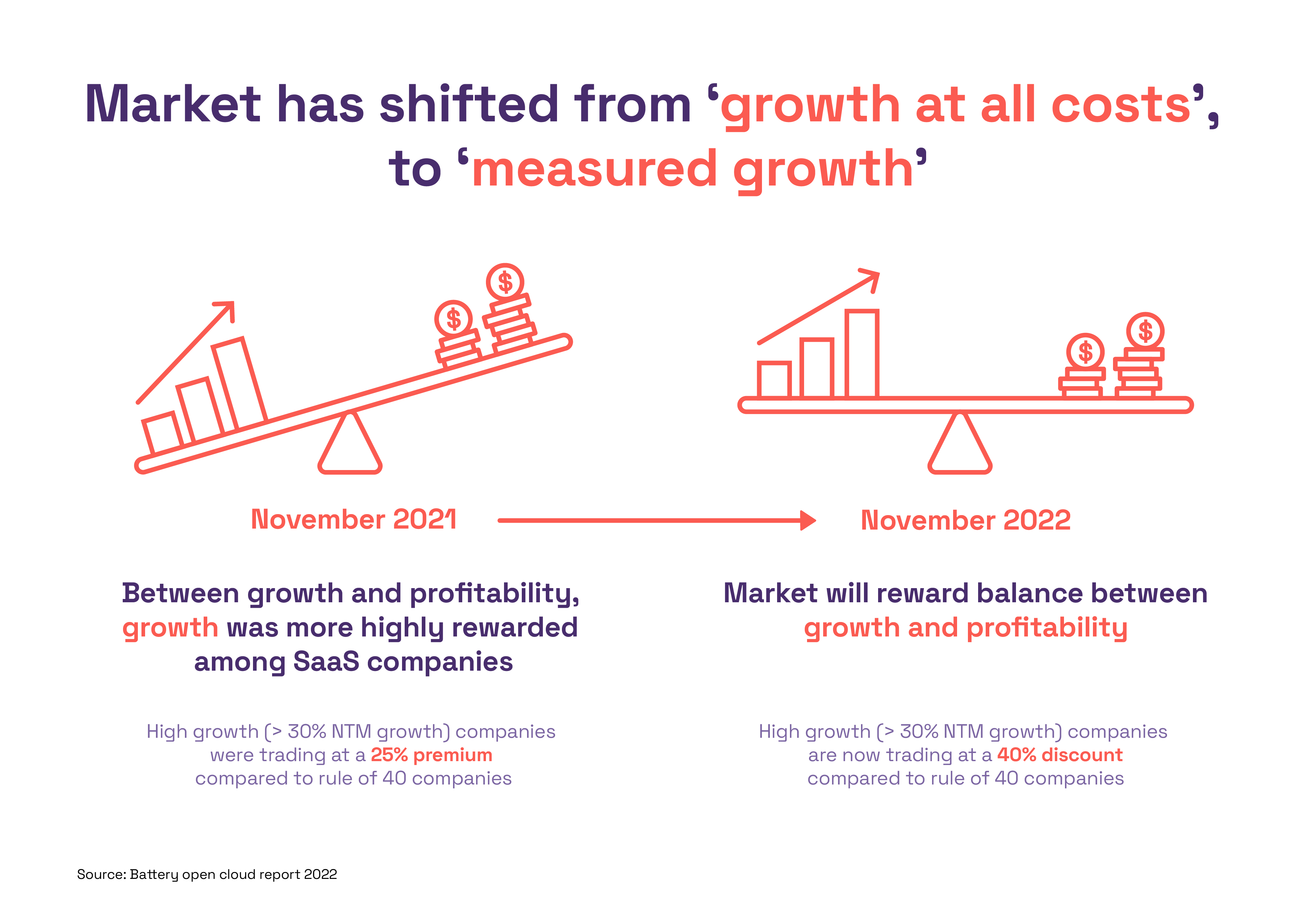 This balance between growth and profitability is something that plays to the strengths of Indian SaaS companies.

Indian SaaS startups can acquire customers at a lower cost relative to their global peers and will be able to grow at a lower cost and faster rate. The price points of their products can be lower than global competitors and still afford positive unit economics. Thanks to the value arbitrage that Indian SaaS companies have in terms of the cost of customer success initiatives, they can retain and expand the customers they acquire better than peers and thus have an additional efficient growth channel. When you put these facets together, Indian SaaS startups are endowed with the ability to deliver consistent growth regardless of market conditions. The availability of high-quality talent and the emergence of India as a domestic market for SaaS products lend further heft to their competitive advantage.

While this might make sense in theory, what are the specific domains and areas where India has the potential to emerge as the SaaS operating system of the world? How do Indian SaaS startups capitalize on these opportunities?

Time Of Our Lives

For SaaS founders, especially those of us who have figured out how to balance growth and profitability, the present time provides an unprecedented opportunity to build long-lasting global businesses.

Our research shows that there are as many as 400 micro-domains that Indian SaaS founders can target. India’s demographic advantages around lower CAC and high-quality customer success at lower prices endow our SaaS startups with a competitive advantage as these micro-domains develop and mature over the next decade. We believe that each of these domains has the potential to become a $100 million+ opportunity by 2030. While there are many ways to slice and dice the overall solution space, it might be useful to frame these opportunities along three specific dimensions.

The first set of opportunities is around traditional SaaS solutions that have been gaining traction over the past five years. While there is still space for India-based SaaS contenders to compete with their global competitors and win in horizontal and vertical SaaS markets, we should bear in mind the fact that the fears of a downturn will inevitably impact technology spend in many of these domains. Unless these solutions are value-accretive, it will be an uphill battle to stay relevant in 2023 and beyond. But even within this broad space, there are three domains that are likely to continue gaining traction even in a recession. Developer tools, solutions built around cloud infrastructure management and security and privacy offerings.

Even as there is a pullback in technology companies with staff layoffs and freezing of new hires, companies will increasingly focus on improving developer productivity and efficiency to get tasks done with smaller workforces – this represents a great opportunity for dev tool startups such as BrowserStack and Postman to continue gaining worldwide traction. The rapid proliferation and maturing of the dev tools spaces has created a number of subsidiary opportunities around code management, content delivery, containerization, logging, testing etc  that can be targeted by focused nimble startups. Given the secular growth of digitization, solutions around cloud infrastructure development and those that offer security and privacy are evergreen “gold fields” that will require investment and attention irrespective of booms and busts cycles.

A number of Indian SaaS startups operate in these domains and are well poised to continue their march toward global success over the next few years. Today, 55-60% of global IT and operations workflows are delivered from India, which hosts 5 million developers, the world’s largest pool. This  deep talent pool and our rich legacy of IT services bestows us with a strong foundation to target untapped potential in new segments.

The second set of opportunities are around building SaaS solutions specifically for the SMB market. While there is no doubt that the enterprise tech market is a mature and large vector for SaaS companies to disrupt, the SMB market represents an often-overlooked opportunity that Indian SaaS startups can uniquely target with positive unit economics. SaaS adoption by small businesses exploded during the pandemic and will continue to rise for the foreseeable future. In large markets like the US, more than 99% of businesses fall in the SMB bucket – while there are challenges around reaching and retaining these SMB customers, SMB SaaS has the potential to offer far better operating metrics to companies that are flexible and adept.

Finally, there is a large set of opportunities around the mainstreaming of AI-powered solutions that can finally deliver long-promised benefits around automation and creativity. Specifically, the hype around “generative AI” is well-deserved.  Generative AI companies around AI-based text and image generation are unleashing new business models and transforming old businesses. Foundational AI platforms such as OpenAI and Stable Diffusion offer a powerful palette of ready-made components that SaaS startups can leverage to offer leap-frog business solutions. While there are already a plethora of Indian SaaS startups offering generative AI solutions around text, audio and video, the current set of vendors are only the tip of the iceberg. The next generation of generative AI startups are likely to be able to offer syncretic broad solutions that can lead to the emergence of global success mission-critical stories that can mirror that of a Google or a Microsoft. Just as the advent of the cloud and the introduction of the mobile phone lead to the emergence of trillion-dollar companies, generative AI might represent a generational platform shift that will fundamentally change the way the world thinks, creates and works. Indian SaaS companies are well positioned to capture, accelerate and scale this opportunity.

Despite fears around a downturn, the confluence of a robust business model, availability of talent and capital and a plethora of market spaces gives Indian SaaS companies a unique opportunity to build multi-generational global B2B businesses and collectively take the nation towards the vision of becoming the SaaS operating system of the world.

it was the winter of despair, it was the spring of hope”

― Adapted from Charles Dickens, A Tale of Two Cities